Counting the Biggest Winners of the $7.2 Billion U.S. Coronavirus Battle 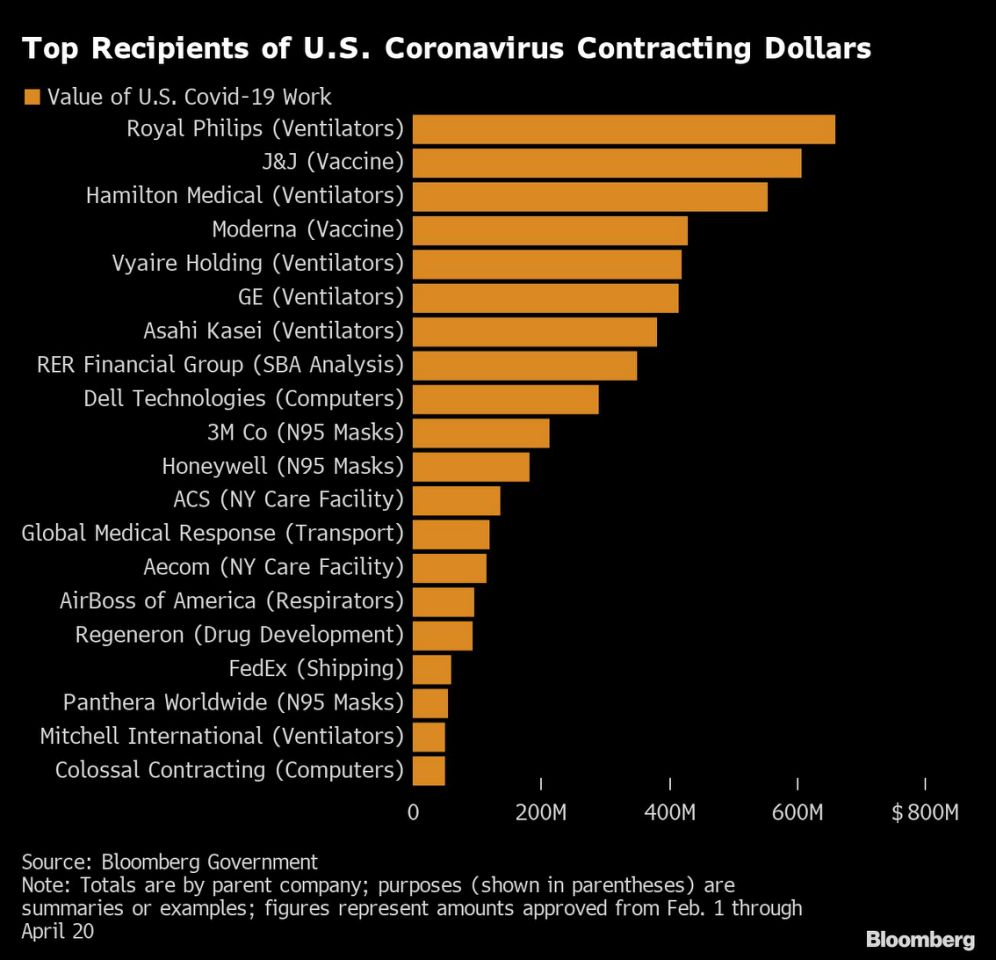 The federal government has awarded $7.2 billion in contracts to fight the coronavirus pandemic, including one that would pay a little-known Massachusetts biotech firm more than its reported revenue for the last three years combined.

The award to Moderna Inc. is just one example of the thousands of federal contracts awarded by the Trump administration to fight the coronavirus, according to a review of federal data compiled by Bloomberg Government. Some companies have secured nine-figure deals to supply thousands of ventilators, face masks, hospital capacity and other critical services needed to manage the outbreak.

Amsterdam-based Royal Philips NV has so far been the top corporate recipient with some $661.4 million in agreements. The vast majority of that sum came on April 8 via a $646.7 million contract to procure ventilators from the health technology giant’s Philips Electronics North America unit.

Health and Human Services last week awarded seven contracts worth a combined $1.4 billion to secure thousands of ventilators, which are needed to treat the most severe cases. Among the awards were a $350 million pact with a U.S. affiliate of Asahi Kasei Corp., a $552 million accord with Hamilton Medical Inc. and a $408 million purchase from Vyaire Holding Co. Each of those companies have other, smaller virus-related contracts, lifting the total value of their government work.

The search for a vaccine to counter the disease spurred other large awards, in addition to Moderna’s. In late March, Johnson & Johnson Inc.’s Janssen Pharmaceuticals unit signed a $456.2 million deal for Covid-19 vaccine development, plus a $148.4 million award for anti-viral therapies. Shares of the parent company have risen 2.6% this year compared to the broader S&P 500 Index’s 15% decline.

The Department of Defense on Tuesday detailed contracts totaling $133 million for 39 million N95 masks made by 3M, Honeywell and a unit of Owens & Minor Inc. over the next 90 days. Those contracts are not reflected in the Bloomberg Government contracting data due to reporting delays.

Separately, Canada’s AirBoss of America Corp. was awarded a contract for more than $96 million to supply the Federal Emergency Management Agency with 100,000 powered air purifying respirator systems. The order is the company’s largest ever and exceeds its average quarterly revenue for the last four quarters.

Shares of Moderna rose sharply after the U.S. Department of Health and Human Services agreed to pay as more than $400 million for the company to develop and test its Covid-19 vaccine now in an initial clinical trial.

Though its market capitalization exceeds $18 billion, the Cambridge-based biotech firm’s revenue was only $60.2 million last year.

Its shares are up 152% this year as of Tuesday’s close.

For more articles like this, please visit us at bloomberg.com

Subscribe now to stay ahead with the most trusted business news source.