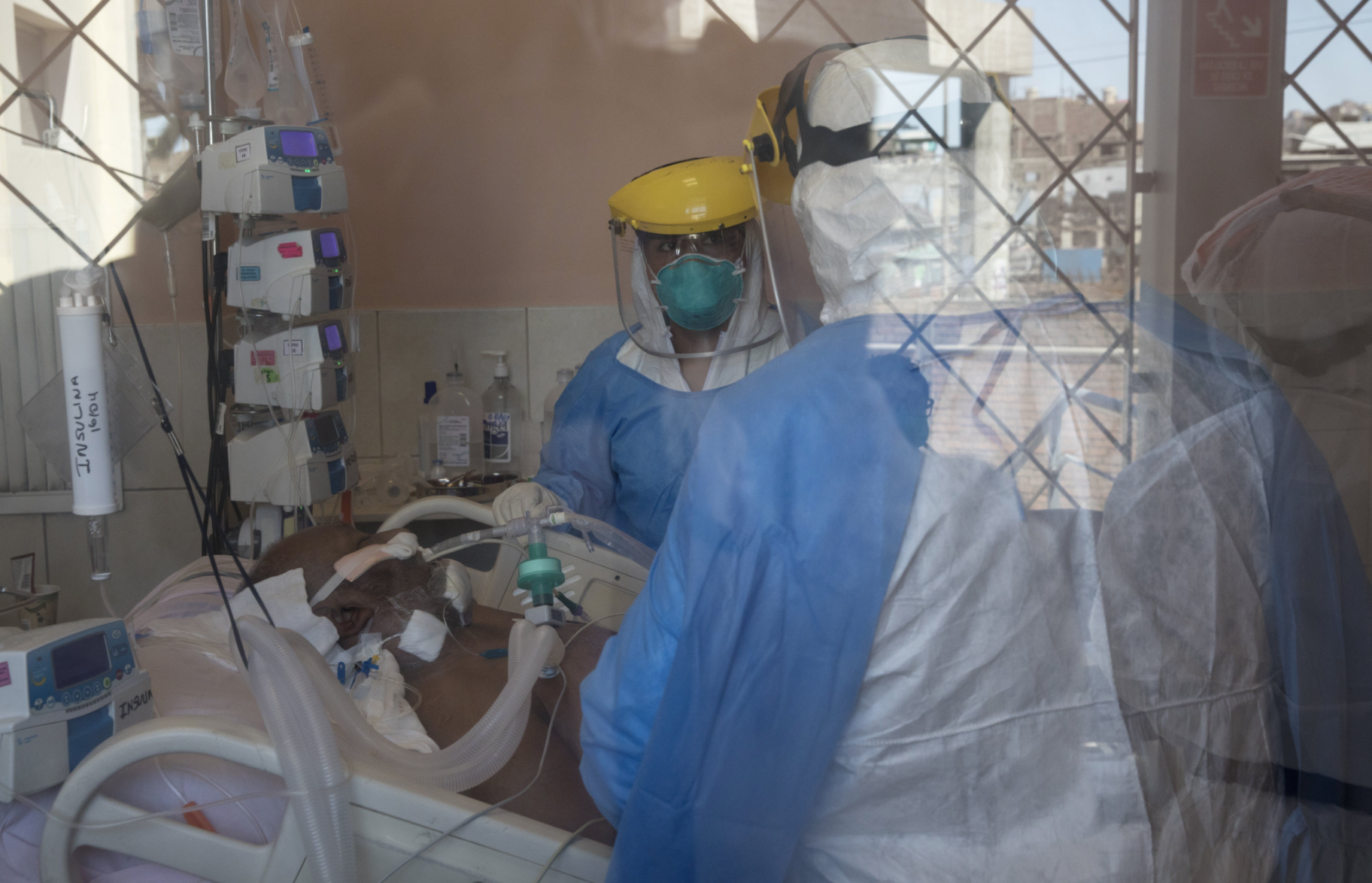 LIMA, Peru (AP) — Seated in a wheelchair at one of Peru’s oldest hospitals, 84-year-old Emma Salvador struggled for each breath, aided by an oxygen mask pinching her face. Her son fanned her with folded sheets of paper, wishing he could do more.

“Seeing her in such pain is what overwhelms me,” said José Gonzalez, 57, who confessed fearing that the worst outcome awaited his mother, while encouraging her to drink some water.

This scene Friday at the Dos de Mayo Hospital in Lima depicts just one of the 13,489 new coronavirus cases in the South American country, which faces a growing number of patients desperate for emergency attention.

Doctors say they’re doing all they can to treat patients throughout the country that’s reporting the second largest number of coronavirus cases in Latin America following Brazil, which has more than double the number. Decades of economic growth in Peru did not include extensive investments in the health system.

Founded in 1875, the Dos de Mayo hospital has long been the preferred choice of medical students eager to gain experience treating a wide spectrum of illnesses. It’s no different now, with tents recently set up on a patio to care for roughly 100 patients a day — including criminals hospitalized under police supervision.

On this day, doctors and nurses treated more than 50 patients. The six most severe in the intensive care area were put into a sedative-induced coma and put on mechanical ventilation.

They are being monitored with cameras connected to large screens that show some of the patients’ lungs filled with white spots due to the injuries and inflammations brought on by the virus.

In the tents, patients silently cling to life on medical beds while some nearby sit on benches. These men and women are hunched over, panting and lonely, despair in their eyes.

Doctors fear that despite their best efforts and a strict government-ordered quarantine, the hospital will struggle to help an increasing number of patients, including those needing scarce medical ventilators. The situation will only become more difficult in the coming days when the infections peak, according to the epidemiological forecasts.

“We have already reached a state of collapse,” Dr. William Torres said Thursday while protesting with colleagues who demanded N95 face masks and medical grade equipment needed to protect themselves.

At least 237 doctors have been infected with the new coronavirus in the country’s hospitals, and the government has summoned foreign health workers to fill the gaps. The urgent need has opened up the possibility for trained Venezuelans who recently migrated to escape their own troubled country.

“We are having to give priority to those who are younger, to those who do not have high-risk factors,” Torres told reporters. “That should not be the case, but we have to do it since there are no more mechanical ventilators.”

It’s a problem that has begun hitting medical centers across the South American nation. A new hospital dedicated to the coronavirus that opened last week only has been staffed by 34 health workers, when it requires 320. It has just 20 intensive care beds, and many of the 35 ventilators are inactive because they are missing parts, the comptroller’s office reported.

At a smaller hospital a few blocks away, and eight dead had to be placed in an improvised morgue built to hold two corpses, officials said.

Despite the lack of personnel, mechanical ventilators and adequate protective equipment, the doctors, nurses and technicians at Dos de Mayo Hospital say they continue to fight the pandemic.

A reported 300 people in Peru have died so far from the COVID-19 disease, officials report.

President Martín Vizcarra said this week that Peru has a “poor” and “disjointed” health system.

Faced with the global shortage of ventilators, the government took the initiative to begin manufacturing 500 devices. They will be called “Samay,” which means “to breathe” in Quechua, the Incan language spoken in the Andean nation.

In Peru, as the sick are brought into the emergency room desperate for breath, health workers of the Dos de Mayo Hospital say they’re doing all they can with inadequate resources.

“We are stressed, but we are doing our best to get patients through this,” said Raquel Chávez, chief of the intensive care unit’s nursing staff.

A glimmer of hope emerged this week, resonating among medical staff throughout the old halls of Dos de Mayo: A 90-year-old man, Valerio Santa Cruz, recovered from the coronavirus and was sent home.

Hearing about the man’s recovery raised the spirits of José González, the son of 84-year-old Emma Salvador, who struggled to breathe in the treatment tent.

“If the old man could pull through,” Gonzalez said, “my mother can be saved.”