Texas Model and Daughter Found in Motel Room, Six Years After Going on the Run 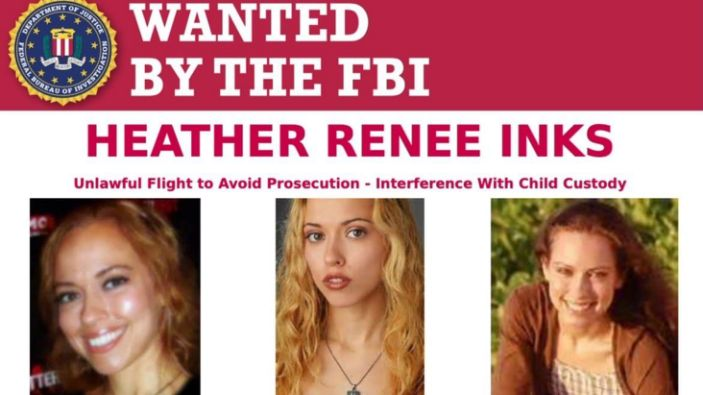 After six years and an international manhunt, a former Texas model accused of kidnapping her daughter and going on the lam has been arrested, authorities said.

Heather Inks, 37, allegedly kidnapped her 11-year-old daughter Penelope in October 2014 and disappeared without a trace after not showing up to a court custody hearing that awarded her ex-husband, Kevin Inks, sole custody. As authorities tirelessly searched for the pair, the mysterious case garnered national attention when Ink was listed on the FBI’s Most Wanted as “armed and dangerous” and the case was featured in several true-crime television shows.

But after years of using fake aliases and traveling around the state in secret, Inks and her daughter were found on April 3 when the former model called the Madisonville Police Department. She asked officers to come to her motel room at the Days Inn and Suites, claiming her “ex-husband was trying to poison her,” a police spokesperson told The Daily Beast.

“Officers responded to the hotel and started questioning the people there,” the spokesperson said, noting that Inks initially gave a false identity. When pressed further, Inks finally gave one of her known aliases, “so, in the system, it came back as her and show[ed] she had an active warrant.” She was immediately apprehended, the spokesperson said.

Klein Investigations, a firm Kevin Inks hired to help find his daughter, said in a press release that authorities then discovered Penelope “had been abandoned in the same motel” in Madisonville, Texas—just two hours from the Texas City home she went missing from.

“Officials made access to another motel and discovered Penelope in the room,” the investigation firm said, adding that “Penelope was found in an emaciated state” and is being treated at a local hospital.

Philip Klein, the private investigator, told ABC13 the now 16-year-old girl weighed about 74 pounds, was “living on Dr. Pepper and candy” and initially refused to eat after authorities found her because she was “confused on who to trust, on who not to trust.”

In a statement obtained by The Daily Beast, Kevin Inks thanked “all investigators that participated in finding my daughter successfully” and asked for privacy as he and his family took “time to digest” and “begin the unification process with Penelope.”

“As you can assume, we are very emotional right now and many details of the capture of my ex-wife and my daughter are yet to come out,” Inks said, adding that he needed privacy because “my daughter is not in a mental or physical state to handle any more stress.”

Years before the 37-year-old ultimately went on the run with her daughter, Heather and Kevin Inks had a years-long tumultuous relationship, culminating in a public feud on the TV show Dr. Phil in 2008. The couple went on the show in an apparent attempt to save their marriage but Inks accused her then-husband of being physically abusive to her and their daughter on live television.

“I am devastated by everything my daughter has seen. Penelope witnesses Kevin being abusive to me all the time, because she’s with me all the time,” she told Dr. Phil, before adding he once picked “her up by the neck” and held her at knifepoint in front of their child.

Denying any allegations of abuse, Kevin threw back that his wife never allowed him to spend alone time with their then-3-year-old daughter. He said that, while he did suffer from anger issues, he knew the relationship affected Penelope, who “acts out from what she sees from our conflict.”

Four years after appearing on television, the couple filed for divorce, according to court records filed in Galveston County. A year later, in 2013, both also took out mutual restraining orders against each other.

Court documents detail a struggle between the two parents on who would retain custody of their only daughter, with Kevin accusing his wife of keeping Penelope away from him despite visitation orders.

Galveston County Court ultimately sided with Kevin after Heather allegedly abducted Penelope from his house on Feb. 18, 2014, an incident that led her to be charged four months later with interference with child custody.

Kevin was granted sole custody of their daughter during a 2014 hearing after his wife exhibited “a history or pattern of violating a court order.” But Inks never showed up—instead allegedly taking Penelope and going on the lam.

“The father had not seen Heather Inks or his daughter since the court hearing,” according to the FBI. On June 14, 2015, Inks was charged with unlawful flight to avoid prosecution and a federal warrant for her arrest was issued by the United States District Court, Southern District of Texas.

In 2016, Kevin posted an emotional 10-minute video message to his daughter on YouTube, pleading for her to come home. He appealed for her to tell somebody she’d been kidnapped, urging her not to be “afraid because, I don’t blame you for anything, any of this—at all—I just want to wrap my arms around you and tell you that I love you.”

“I know, living the way you are at this age, I know that you know something is wrong and I want you to feel safe. I don’t care what you have been told, go to a neighbor’s house, pull a police officer aside and tell him that you have been kidnapped,” Kevin Inks said in the message. He stressed that he’d “never given up.”

While Penelope seemingly never acted on her father’s plea to escape, the federal arrest warrant for Inks was still active on April 3 when she reportedly called authorities from her motel room, stating that she feared for her safety. She was being held at Galveston County jail on Friday on a $300,000 bond and a federal hold that prevents her from paying her bond.

Jessica Ebbs, a court-appointed lawyer representing Inks, declined The Daily Beast’s request for comment on the arrest, allegations of Penelope’s ill-health, or the allegation that her ex-husband was trying to poison her.

Read more at The Daily Beast.