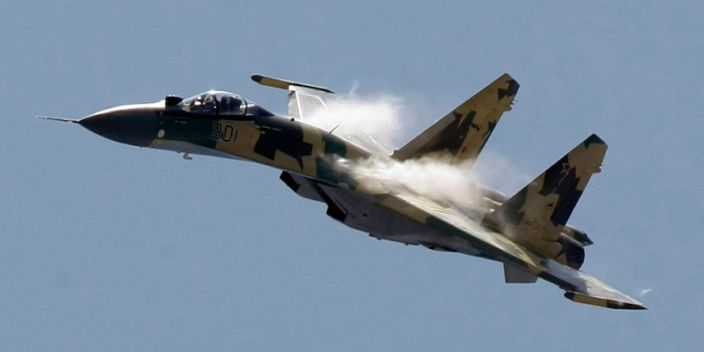 According to a Navy press release, in a period of roughly an hour and a half on Sunday, a Russian Su-35 fighter twice intercepted a US Navy P-8A Poseidon Maritime Patrol and Reconnaissance Aircraft operating in international airspace over the Mediterranean. While the first intercept was acceptable, the Navy considered the second to be “unsafe and unprofessional.”

During the risky intercept, the Navy says the Russian fighter executed a “high-speed, high-powered maneuver that decreased aircraft separation to within 25 feet, directly in front of the P-8A, exposing the US aircraft to wake turbulence and jet exhaust.” The P-8A descended in order to create space between it and the Russian fighter jet.

The Navy accused the Russian pilot of “seriously jeopardizing the safety of flight of both aircraft.”

The service captured the incident on video.

Sunday’s intercept follows a similar incident on April 15, when a Russian Su-35 intercepted a P-8A over the Mediterranean, conducting “a high-speed, inverted maneuver, 25 ft. directly in front of the mission aircraft,” the Navy said in a statement issued at the time.

The Navy said the actions of the Russian aircraft were “irresponsible” and accused Russia of putting “our pilots and crew at risk.”

In both cases, the Navy said, the US aircraft did not provoke the Russian fighters.

Show more professionalism. Fly with more regard for safety. The life you save might be your own https://t.co/luuwW1dhzg

The US is battling a serious coronavirus outbreak, but US adversaries continue to cause headaches for the military.

This week, the US Navy also had an unpleasant run-in with Iran’s Islamic Revolutionary Guard Corps Navy.

On Wednesday, 11 IRGCN vessels “conducted dangerous and harassing approaches” against US Navy and Coast Guard vessels operating in the Persian Gulf, repeatedly crossing the bows and sterns of the US ships and at one point coming within just 10 yards of a US vessel.

“This is why I said we must maintain our national mission capabilities — our readiness, our ability to protect the United States — because our adversaries are not standing down,” Secretary of Defense Mark Esper said Thursday on NBC’s “Today.”