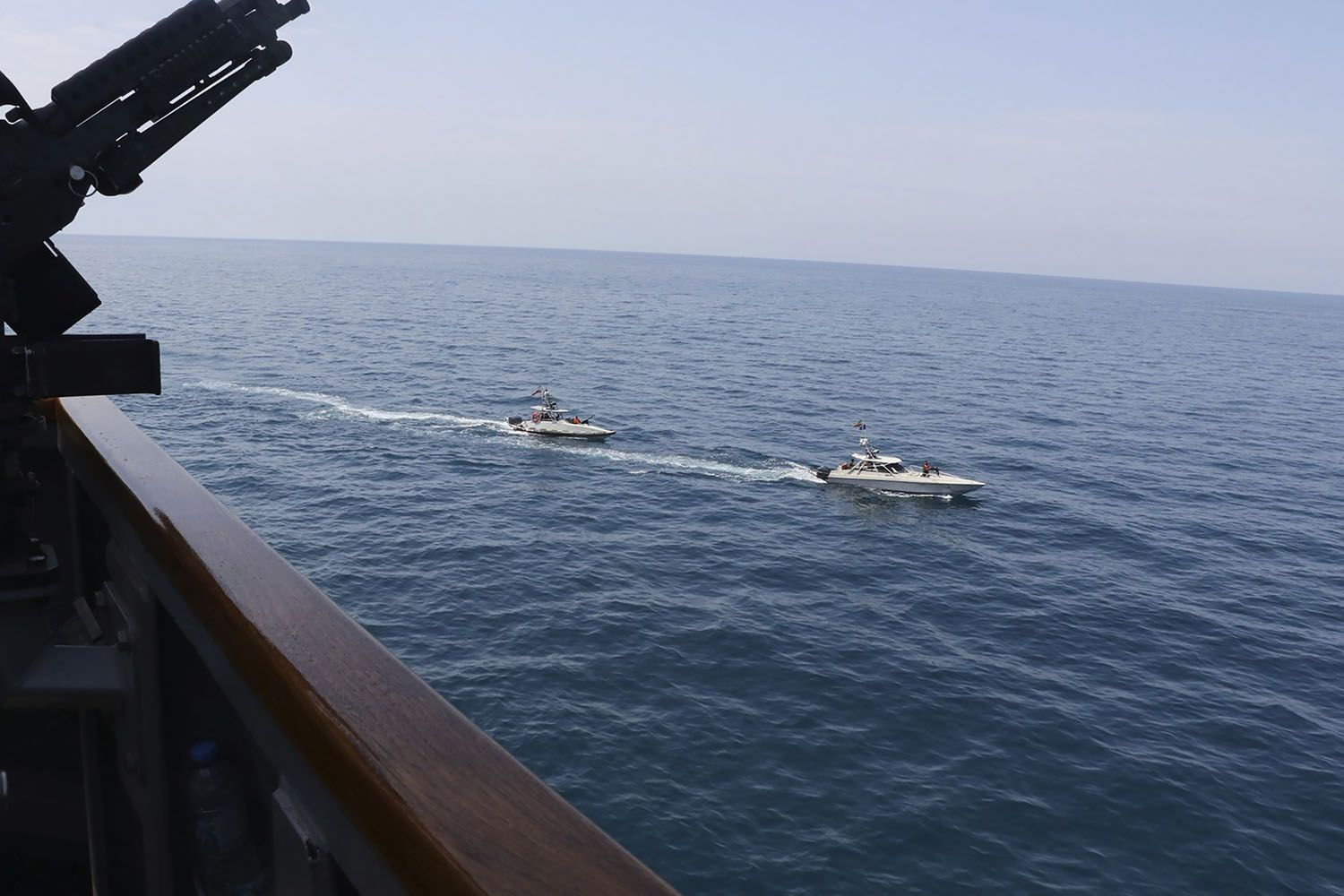 President Donald Trump abruptly tweeted early Wednesday that he has directed the Navy to fire upon Iranian “gunboats” that “harass” U.S. ships in a new sign of heightened tensions between Washington and Tehran.

“I have instructed the United States Navy to shoot down and destroy any and all Iranian gunboats if they harass our ships at sea,” Trump tweeted.

Asked for clarification, Joint Chiefs Vice Chairman Gen. John Hyten told reporters the tweet was a warning to Iran, and emphasized that Navy commanders understand how to respond to hostile acts.

“If you come across and you are at a safe distance and you are waving, that’s one thing. If you have a gun and you point it at me, that’s another thing,” Hyten said. “We know what that line is and we will respond.”

“The president’s message was crystal clear,” he said.

An Iranian armed forces spokesman responded to the tweet by suggesting the U.S. government should focus on saving its service members from coronavirus.

“Today, instead of bullying others, the Americans should put all their efforts toward saving those members of their forces who are infected with coronavirus,” Abolfazl Shekarchi said, according to the ISNA news agency.

Trump’s tweet comes one week after the Navy announced that 11 Iranian vessels had conducted “dangerous and harassing” approaches of U.S. ships in the international waters of the northern Persian Gulf, coming as close as 10 yards to a Coast Guard cutter.

“The IRGCN’s dangerous and provocative actions increased the risk of miscalculation and collision, were not in accordance,” with international regulations, the Navy said at the time. The statement referred the Islamic Revolutionary Guards Corps Navy.

The incident was the first provocative exchange between the two nations since early March, when U.S. and coalition aircraft struck Iran-backed Kataib Hezbollah militia group locations in Iraq in retaliation for the deaths of two U.S. troops in a rocket attack a day earlier.

New guidance directing the Navy to fire upon Iranian vessels that “harass” U.S. ships would be a significant change to commanders’ rules of engagement in the theater, one former defense official said. Commanders can respond to a direct threat, for instance, only if a vessel fires at a U.S. ship.

“The U.S. Navy has clear rules of engagement issued by the chain of command and reviewed to ensure they are consistent with all applicable laws of the sea and armed conflict,” said Michael Mulroy, who served as the Pentagon’s Middle East policy chief until December. “Any Iranian actions that directly threatens our naval vessels and their crew will be dealt with based on those rules of engagement.”

Mulroy added that the United States has not defined harassment as a “direct threat.” Otherwise, “we would be shooting at a lot of Russian planes,” he noted, referring to regular incidents of Russian jets buzzing U.S. aircraft.

Retired Vice Adm. John Miller, former commander of the U.S. 5th Fleet, said the president’s tweet was likely designed to send a message to Iran and should not change existing rules of engagement for Navy ships defending themselves in the Gulf.

“Navy commanders are more than capable of understanding when the president says something, that’s meant for an outside audience as opposed to direction to them,” Miller told POLITICO. “It’s the president’s way, which isn’t always as smooth as we’d like it to be, of telling Iran, ‘Hey, stay away from our ships.”

Former Navy Secretary Ray Mabus said the tweet likely does not change the rules of engagement because the Pentagon requires formal orders rather than “orders from Tweets.” He posited that the president is “trying to distract from Covid-19.”

Trump’s tweet comes on the heels of an announcement by Iran’s Revolutionary Guards Corps that it had successfully launched the country’s first military satellite into orbit, amid concern from Western officials about Tehran’s nuclear program.

This is not the first time Trump has threatened Iranian vessels. During the 2016 presidential campaign, he said if Iranian boats harass U.S. ships in the Gulf, “they will be shot out of the water.” The U.S. military reported multiple interactions with Iranian military vessels in 2016 and 2017; on several occasions U.S. Navy ships went so far as to fire warning shots at Iranian vessels that got too close.